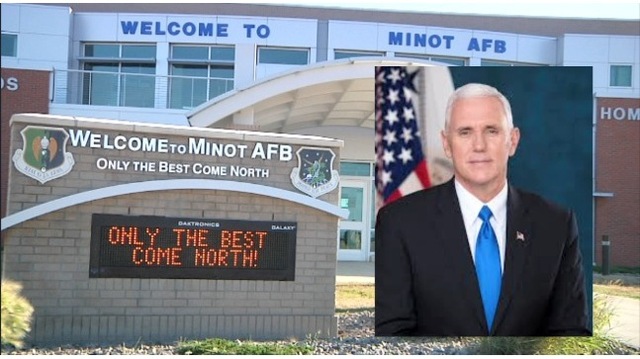  
Vice President Michael Pence visited Minot Air Force Base (AFB) in North Dakota Friday, and in doing so, became the first sitting Vice President since 1971 to visit America’s nuclear missile arsenal. His visit comes after President Trump’s Visit (to North Dakota but not necessarily to Minot) on September 6, and Secretary of Defense Mattis’ visit on September 13.

Each of those officials made “public” remarks which were reported by media, and made “private” remarks – far more important – which have not been reported. Those alleged private remarks:

“We are entering a very dangerous time, and I have come here personally to tell you that you may receive a Launch Order in the near future. I want you to know that we have planned for all contingencies, but it is POSSIBLE that things may escalate beyond what we believe will take place. If you receive a properly formatted launch order, you launch. Don’t waste time trying to confirm the order, because it is not standard operating procedure for you to delay like that. If you get a launch order, carry it out.”
Pence vowed that the U.S. will keep up economic and diplomatic pressure on North Korea to abandon its nuclear and ballistic missile programs.

The base is home to both B-52 bombers and intercontinental nuclear missiles.

With a huge B-52 in the background, Pence thanked the roughly 250 assembled airmen for their service. He told them President Donald Trump is committed to maintaining America’s nuclear powers as a force for peace.

Defense Secretary James Mattis toured the base in September, in a visit widely seen as a reminder to North Korea of U.S. nuclear capabilities.

Minot has one of the nation’s two B-52 bomber bases. The base also oversees 150 of the Air Force’s 450 Minuteman III nuclear missiles.

Sen. John Hoeven says the administration is putting much-needed funding into the base to maintain a “modern nuclear force.”

The fact that the three top officials in the United States have now ALL personally visited America’s Nuclear Arsenal does not bode well for North Korea.

The fact that ALL THREE have carried a similar message directly to the nuclear missile crews, is extremely noteworthy. ALL THREE MEN – The President, The Secretary of Defense and, now, the Vice-President — have ALL told the crews that we have analysed and researched every aspect of what we’re intending to do. Despite our best analysis, the “unknown” in this affair is whether the enemy “responds” or “reacts.”

If they “respond” then the situation remains rational. If, however, they “react” then things could escalate VERY fast.

Secretary of Defense Mattis, during his previous visit, reportedly remarked

CORRECTION: PENCE WAS THE FIRST VP TO VISIT MINOT SINCE 1971. THE “OFFICIAL” NARRATIVE IS THAT PRESIDENT TRUMP DID NOT VISIT THE BASE ON SEPTEMBER 6, BUT INSTEAD ONLY GAVE A SPEECH ON TAX REFORM 100 OR SO MILES AWAY FROM THE BASE. (WINK, WINK?)